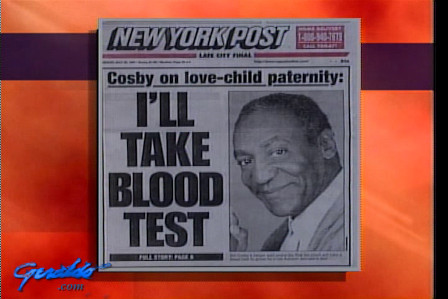 "Autumn has spent her life, believing that this man, Mr. Cosby, is her father.  A paternity suit at this point would do nothing more to establish the legitimacy of that belief..."  "We're prepared to address that right now.  As we speak, Mr. Cosby is having blood drawn for a DNA test."  "You are creating news?"  "I am telling you what is happening as we speak.  We are calling Mr. Baum's bluff.  Mr. Cosby is having blood drawn for a DNA test right now, all we need..."  Bill Cosby's attorney made that stunning announcement on my CNBC show, that one of the most powerful, famous men in Hollywood had agreed to take a paternity test.  He did it because he wanted to prove that he was Not the father of the young woman Autumn Jackson, just found guilty of attempting to extort millions of dollars from Mr. Cosby.  It was of course, the right thing to do.  It certainly focused our attention on this whole issue, of who's daddy.